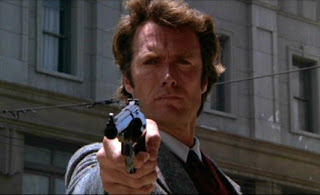 At this point, Clint Eastwood's "Dirty" Harry Callahan is something of a legend, a mythological figure in the annals of Hollywood. An ideological forefather of Jack Bauer, the ultimate archetype of the rule-bending policeman, even the inspiration for a Gorillaz song - Dirty Harry has a lot of hype following him almost forty years after his big screen debut.

As cop movies go, this is probably one of the most definitive - though I'm going to try to avoid blacking-out pixels in such rehashing of canonically accepted beliefs of Dirty Harry's overall superlativity in filmdom. Sgt. "Dirty" Harry Callahan (Eastwood) is called in on a less-than-routine homicide after sniper Scorpio (a wickedly creepy Andy Robinson) sends a ransom note to the mayor (John "Dean Wormer" Vernon), virtually holding the city hostage. While on the case, Callahan ends up stopping a "211 (robbery) in progress" and having to decide between following the rules or stopping Scorpio before he kills again. Things get complicated when Scorpio kidnaps a young girl and buries her alive - then we find out just why Callahan is nicknamed "Dirty Harry."

That's only half the movie, but I've got to stop the plot summary there because it'd be criminal to give away any further details. Of course, like I said, director Don Siegel's first installment of what would eventually become a full-fledged franchise is something that most people have probably already seen. If you haven't, you should. Maybe it's all this talk about waterboarding and closing Gitmo, but something about Dirty Harry seemed if not timeless then at least timely. It's aged well, like a good cheese or wine, without much to date the piece as nearing its fourth decade.

Despite Roger Ebert labeling the morals of Dirty Harry as "fascist," it's difficult not to root for Callahan here, thanks in large part to Eastwood's gruffly endearing portrayal. The movie is riddled with iconic moments, like the "211 in progress" scene in which Eastwood growls his now famous "Do I feel lucky?" speech, so major props have to go to Harry Julian Fink & Co. as well for a knockout screenplay. Additionally, Siegel has a great intuition when it comes to guiding the eye of the audience (using several innovative camera angles to disorient when necessary) as well as an uncanny ability to play on the imagination, wisely showing us some things and keeping us from seeing others.

And, as far as great Hollywood villains go, Andy Robinson stands right up there with Ted Levine's Buffalo Bill from Demme's The Silence of the Lambs. Robinson sneers his way through the movie, a walking instability that could break at any minute, devising cruel plans to wreak havoc while building his own personal vendetta against Callahan. Robinson has talked about this role as a career killer of sorts, but that's the double-edged sword of pitch-perfect casting. (Ledger's Joker, anyone?). This, pardon the cliche, is one cat you wouldn't want to meet in a dark alley.

Unless, of course, you're feeling lucky. Well, do you? 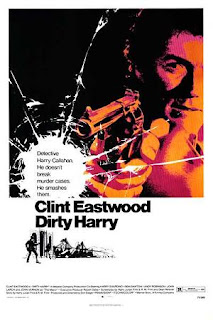 The MPAA gave Dirty Harry an R, a rating that would probably stand today. The movie is violent without being excessive, indeed looking a little more fake than today's standards. Objectionable language is somewhat sparse, and there's a surprising but not graphic or close-up amount of nudity. Leave the kids at home.
Posted by Zach at 8:52 PM