When The Last Jedi came out two years ago, I observed of its theme (but for whatever reason did not say so in my review) that it seemed to be the story of “looking for hope in Alderaan places.” The film had been a tale of failures, of misplaced hope and crushing defeats, but it also ended up reaffirming that the Resistance’s true hope lay in the princess of Alderaan and her brother in exile, and the legacy they were building for the next generation. In the follow-up, The Rise of Skywalker, that legacy comes to bear in unexpected ways, crowd-pleasing and recontextualizing for an emotionally successful finale to this Sequel Trilogy and the Skywalker Saga writ large.

(As ever, there won’t be spoilers here; even the major reveal, divulged in the film’s opening crawl, is a sacred mystery in this review.)

After narrowly escaping The Last Jedi with their lives, agents of the Resistance are on the run from the First Order, gathering what few allies they can find in a galaxy that’s given up. While Kylo Ren (Adam Driver) marshals the forces of the First Order, Rey, Finn, and Poe (Daisy Ridley, John Boyega, and Oscar Isaac) head into the unknown in search of a way to prevent the complete obliteration of the Resistance, meeting new friends and old while Rey decides, once and for all, what her destiny will be.

So much exhausting ink is being spilled about whether or not The Rise of Skywalker “betrays” The Last Jedi by walking back or diminishing certain aspects of the film, whether or not this film “ruins” Star Wars or if returning director J.J. Abrams hates predecessor Rian Johnson. All of this is to say that no one hates Star Wars more than Star Wars fans, especially that vexing vocal minority monopolizing internet chatter. In the case of The Rise of Skywalker, I found myself strongly reminded of Return of the Jedi, itself a capper to a trilogy and an ostensible end to a story. Both films play it a little safer than their edgier forebearers, but both make up for that decrease in originality by dialing up the emotional resonance. Where Return of the Jedi reunited its heroic trinity for one last mission, Rise of Skywalker gives us Rey, Finn, and Poe properly together for the first time, having kept them apart for much of the preceding two films. It’s a real joy to see these three side by side, and their interactions carry the weight of all the adventures we didn’t get to see between films.

Critics have lamented the way the film is perhaps overfilled with setpieces, characters, and side quests, to which I have to say, I hope they enjoyed their first Star Wars film – because this is a franchise that has always been overfull of bits, fodder for imagination and tie-in media alike. True, Rise of Skywalker begins with its foot on the gas and never quite lets up, but as the third film in a trilogy there’s not a lot of time for much else, especially when the stakes are as dire as they are here. In fact, however, there’s a beat near the end of the second act where the plot does slow down, and it’s one of the most emotionally resonant corners of the film.

I was disappointed to find my audience so quiet during the film because there are a number of moments where you want to pump your fists and cheer. (The biggest laugh seemed to be who gets the line, “I’ve got a bad feeling about this.”) Perhaps audiences have been down this road so many times since 2015 – where, recall, the Milennium Falcon’s appearance got a big cheer – but suffice it to say I was charmed and cheered by more than a few sequences, including, and this is not a spoiler, a silent cameo from the Maestro himself, John Williams. Speaking of Williams, it’s his grand finale, too, and there are only so many ways to praise a man with more than 50 Academy Award nominations; he’s got an impressive body of work on which to draw, and he does so in ways that are breathtaking. I sense, however, that J.J. Abrams is still less comfortable with an orchestral score than Rian Johnson was, so I’m eager to see the film again after getting more familiar with the score (which remains, incidentally, my favorite component of any Star Wars material, period).

In the way that Return of the Jedi was an ending that gestured at a beginning, Rise of Skywalker is the final act in a nine-piece story, with plenty of space for what happens next, but it’s also acutely aware that there are things it needs to resolve. Leavened with the usual amount of space nonsense – which I love – the film cobbles macguffins together to get us to a sequence that orbits around Chekhov’s gun while wrapping up one of the Sequel Trilogy’s most potent emotional questions, and my only complaint is that it does so in a way that makes me want a whole movie or two of just thatcomponent. But taken as part three of three (and I feel I must be terribly vague here) the impossibility of continuation is perhaps for the best, as it needs first to resolve an entire arc, not establish a new one. That’s what the toys are for, folks.

As with nearly any film, there are moments I would have done differently. I’d have liked to see a few returning faces have a few more scenes, but there isn’t really anything to trim to make room for that. (In a post-Endgame world, though, I’d have been up for a three-hour space opera!) But in a world where toxic fandom demands that a piece of art conform to every single expectation, where the villains of the story are the ones who insist on rewriting history to accede to their vision for the galaxy, I find it’s much healthier to review the film we actually got instead of the one I might have made. And the Rise of Skywalker before us is pretty swell. 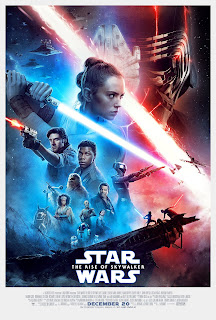 Hey, I got a Cinema King notice in my mailbox! Nice to hear from ya, been a while!


SPOILERS
I thought it was fine. Not particularly good, not bad. I thought it was just focused on the big final battle, at the expense of plot or character depth. Even though there quite a few plot turns and cameos I didn't expect, none of them them really got an emotional reaction out of me (Han’s cameo kinda, though I laughed a bit imagining Harrison Ford grouching about how he thought he was done with the character, but NO!). So it was fun while watching it, but I had already moved on 24 hours later.

I do think it’s fair to say they walked back some of The Last Jedi, which I think was a mistake (while I will admit TLJ is flawed structurally, its good parts are great and its ideas are interesting). Overall, I think the sequel trilogy was a missed opportunity because it never decided on what it wanted to be, and took the fan reaction too much to heart.