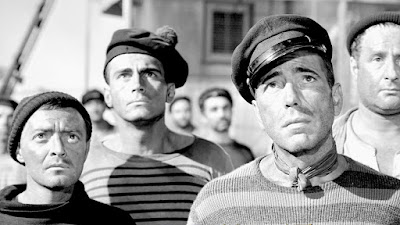 If last week’s Background to Danger was an attempt to recapture the magic of Casablanca, Passage to Marseille is an even more transparent effort to reunite the stars, the director, and the atmosphere of its iconic predecessor. Passage gets nearer to the mark, thanks especially to returning star Humphrey Bogart, though its labyrinthine structure plays a weird and distancing game with its audience.

Passage to Marseille begins with the journalist Manning (John Loder) interviewing Captain Freycinet (Claude Rains) about a Free French outpost in England. Freycinet tells Manning the incredible story of the naval voyage aboard the Ville de Nancy, where he was introduced to the garrison’s infamous gunner, Jean Matrac (Humphrey Bogart). There Matrac relays the strange way and his band (including Peter Lorre, Helmut Dantine, George Tobias, and Philip Dorn) made their way from the Devil’s Island into the service of the French air force.

Passage to Marseille has become notable for its Inception-like plotting, which features a flashback within a flashback within a flashback. It’s evident that the film is an adaptation of a novel, where such narrative devices are commonplace, but in a film it’s a bit disorienting to be continually reminded that what we are seeing is actually just a story being told to one of the characters. Freycinet tells Manning about his first meeting with Matrac, at which time Matrac told him a story about being imprisoned on Devil’s Island, at which time the prisoners told each other the story of Matrac’s arrest. The film spirals ever backwards into history, with four separate timelines; none of it is too confusing, and as narrators go one could do a lot worse than Claude Rains, but it is peculiar to have to wait for nearly half the film to understand why we should care about most of the characters.

Fortunately, Bogart’s star power does much of the heavy lifting. The minute we see him, we too are eager to learn more about Matrac, this haunted and driven gunner. Bogart’s performance is clearly meant to emulate Rick Blaine of Casablanca, with his specific brand of morality driving him away from, then into, the Second World War. But there is something too of Fred C. Dobbs from The Treasure of the Sierra Madre in Jean Matrac, particularly in the Devil’s Island sequence where we see Matrac wrestle with his captors, false imprisonment and his own budding madness. As ever, Bogart is electrifying, though the film neuters itself by reminding us that we have already seen that Matrac will escape.

While sporting an eyepatch, Claude Rains does his usual Claude Rains thing, all elegance and precision. I was a little surprised to see the film not flash back to the loss of Freycinet’s eye, though Rains weaves it into the understated backstory of the character, treating it not as a handicap but as a welcome challenge to how he can continue to serve France. Among the rest of the cast, Lorre is a stand-out, though perhaps I’m biased. His Marius seems to be Matrac’s deputy, helping first to recruit Matrac in the escape attempt and then aiding him as he leads the other men to freedom. In the Ville de Nancy timeline, Marius is eager to speak for himself and his brothers, while simultaneously deferring to Matrac when he deigns to lift his voice.

Relative to our purposes this month, Sydney Greenstreet and Peter Lorre are once again kept apart for nearly all of the film, though the rampant chemistry between Bogart and Lorre is on full delightful display. Where he stumbled as a Nazi in Background to Danger, Greenstreet is better cast as the martinet Major Duval, who relies solely on his own intuition and who wields respect like a bullwhip. Greenstreet and Lorre only have the one significant scene together, in which Duval’s interrogation precedes Freycinet’s more sympathetic dialogue, and it’s a fine centerpiece for Greenstreet to tell us plenty about Duval. As usual, in this sequence Lorre tells us more about Marius in the moments when he’s not speaking, but one cannot help – especially this month – wanting more, more, more.

Director Michael Curtiz, himself of Casablanca, went to great pains to reassemble as much of the magic from that film in Passage to Marseille. So much of the cast returns for this one, right down to a cameo from singer Corinna Mura. (Even Michèle Morgan, in her thankless role as Matrac’s wife, has a Casablanca connection – she screen-tested for the role that inevitably went to Ingrid Bergman after Warner Bros lowballed RKO for a release from her contract.) Between Curtiz’s directorial eye and the musical ear of Max Steiner, who bombards the film with refrains from the French national anthem La Marseillaise, the film’s every impulse seems to invite comparisons with Casablanca – short of thinly remaking the film, as was the wont of the Golden Age of cinema, it seems there was little more that anyone could have done to make this film more like Casablanca.

You don’t need me to tell you, however, that Casablanca needs no remake. It’s cute to watch them try, and a film starring Bogart in his prime is never a misuse of one’s time, but Passage to Marseille is neither quite what it aims to be nor precisely what its audience expects of it. As the old saying goes, though, here’s looking at you – even a vanilla Golden Age war film is still worth a look. 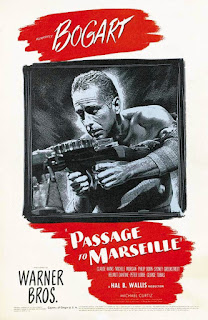